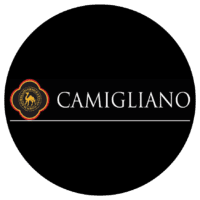 The current manor house was built inside the entry gate (called “Borgone”) of the old “castle” making the most of the ancient walls that surrounded the homestead. The symbol of Camigliano: the camel, found on a seal dating to the 13th century, can perhaps be connected to the influence of the papacy in the area, and there is speculation of connection to the movements of the Crusades that reached the Holy Land.